Before fishing or visiting PAA waters we recommend that you please check: Penrith Anglers Safety notes for members and visitors

The trout season starts on the 15th March and ends at midnight on the 30th September.
Grayling can also be fished for during this time except for the period from and including the 15th March to and including the 15th June, for further information on winter fishing for grayling go to Grayling. (Anyone who is unsure about closed seasons and fishery byelaws should go to Environment Agency rod fishing bylaws: north west region where they can get the information they require.)

Fishing is by fly only, with the exception that worm fishing will be allowed by junior members for trout only on selected stretches and spinning for Salmon is allowed on selected beats

There is a bag limit of 2 fish per day in total, except on the Rivers Petteril , Leith and Lyvennet which are catch and release only.

Early season - wet fly or nymphs are the most productive methods, although a good hatch of large dark olives can bring fish up in the coldest of weather.

By mid May, day time hatches start to become more regular with a wider variety of insects to be found. Regular evening rises don't generally begin until the latter part of May, with the Olive Upright being the most predominant species along with the midges and several species of sedge.

June and early July produce sport all day and evening, with large hatches of blue winged Olives and pale wateries. Bustard fishing also begins at this time. This is a form of nocturnal wet fly fishing particular to this area.

Late July and August finds day time fishing becoming less productive, but searching the faster water with nymphs works well, particularly between ranunculus. Nevertheless, some exceptional sport is to be had in the evenings, with large falls of spinners. Sometimes sport may be difficult when fish are preoccupied on reed smuts, hook size 20 to 26 with low diameter leaders are a must.

PROFESSIONAL TUITION: Professional Angling Instruction is available to all members of the Association from the following :

Geoff Johnston - 'The Eden Angler' - Guided Fly fishing and tuition on various techniques and casting for both beginners and the more advanced. 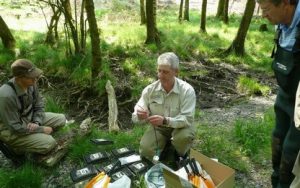 Andrew Dixon & Stuart Crofts have been running the ‘Entomology for Anglers’ course at the Freshwater Biological Association each year since 2009. The course is to help anglers increase their knowledge of entomology which will aid in the success of catching fish more consistently.
Click here for more information